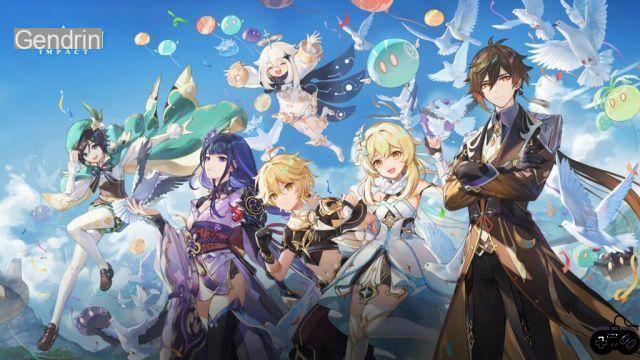 Since its release a year ago, Genshin Impact has become one of the biggest video games in the RPG genre, with gamers and critics praising it for its setting, music, and expansive roster, allowing gamers to enjoy and d adapt their style of play according to their quests and preferences.

With 41 playable characters available, and one more coming in Update 2.2 with the debut of Thoma, it can be hard to know what your best options are, before embarking on your journey to defeat the biggest threats in the world. Teyvat.

So this time we bring you a guide with the tier lists of each of the best characters based on their main weapons. Although some of them can be difficult to obtain due to their rarity, their effectiveness and usefulness in battle make them essential pieces for any team.

These tier lists will be divided into four tiers, which we will describe below:

It goes without saying, but it's worth pointing out nonetheless, tier lists aren't an exact science, especially in a game where most of your party preferences will depend on your luck or even your favorites, however, it will bring you a better perspective on how to build your team in the best possible way.

Without further ado, let's get started.

Thanks to his elemental burst, Venti can create a lot of CC while his high energy recharge rate allows him to spam his abilities faster. As for Ganyu, she can do a lot of skill combos that can deal with large crowds of enemies.

Tartaglia has one of the highest DPS thanks to his entire arsenal, also having melee damage using his Hydro daggers. Yoimiya has good DPS, thanks to his firework-based attacks as well as his Pyro AoE skills.

Diona can provide plenty of shields and healing, while her Cryo abilities can easily freeze multiple enemies at once, while Kujou Sara has a lot of potential as a support and sub-DPS unit, thanks to the power of her Electro skills that can boost your team and create awesome Elemental reactions.

Aloy is a good DPS dealer, as she can hit hard when combined with her Predator bow, unfortunately her best potential is limited only to PlayStation users. Fischl can deal tons of Electro DMG through her Oz crow, useful for many elemental reactions, however, she is well overshadowed by Sara's power.

Lastly, Amber is useful for puzzles and can come in handy in an emergency whenever you need to blow something up with Pyro attacks, however, if you already have Yoimiya, forget about her.

Thanks to his bombs and high base attack stats, Klee can become as strong as a supernova in battle, though his range can be a bit tricky. Mona is one of the best supports because she can immobilize multiple enemies at once, allowing for Cryo reactions, and her taunting ghost can protect your other units.

Sucrose can launch enemies into the air with his Anemo skills, and his Burst allows him to do good elemental reactions in a gigantic vortex. Yanfei has a lot of powerful charged attacks thanks to his Scarlet Seals passive, which increases his damage potential. Meanwhile, Sangonomiya Kokomi is the quintessential new healer, as all of her abilities are purely based on surviving your team against even the toughest enemies.

Barbara is another great healer, fantastic for emergencies, although she has the weakest base attack in the game. Ningguang's unique shield can help shape the fight as it blocks projectiles and grants buffs, and his attacks can do a lot of DPS.

Lisa's Electro skills are good due to her high base ATK, but they are of little use compared to other Electro characters.

Diluc is one of the best DPS characters in the game, with the highest base attack power and devastating Pyro abilities. Eula is also another great alternative, as she can deal massive physical damage with her stacks, Cryo abilities, and fast strikes.

Razor is among the best close combat characters thanks to his skills that increase his melee damage, however, his lack of usefulness with elemental reactions can be quite difficult to deal with. Sayu can deal damage and also heal party members, and her elemental skill deals impressive amounts of damage as she spins across the battlefield. Chongyun's Cryo abilities allow him to do a lot of elemental reactions, which can immobilize and defeat any enemy if paired with a good Hydro character.

Beidou is an explosively powerful character who can cope with any challenge you encounter, however, it depends on how much you upgrade his power. Noelle might be a bit weak compared to the others, however, her stats and defensive abilities make her one of the most tanky characters in the game.

As for Xinyan, she has the best basic attack of all 4-star characters, becoming a good option in case you don't have Diluc or a good Pyro character on hand.

The Raiden Shogun has shocked her way to the next level, thanks to her majestic Electro abilities, and combined with her passive energy regeneration, she's one of the best things to carry around on your team. Hu Tao's attacks can deal large amounts of Pyro DMG through her elemental skills, and combined with her burst, she can become a high damage OP dealer.

Zhongli's geographic abilities make him one of the most sought after characters in the game, with high damage and plenty of resilience in combat. Xiao is a DPS-based character, able to hit multiple enemies at the same time and with her burst, becomes a demon that can destroy anything in its path.

Xiangling can be a good alternative for a Pyro character thanks to her area skills and fast attacks, and Rosaria's arsenal makes her a very useful character for her Cryo AoE reactions, but compared to other Cryo characters her usefulness is very limited.

Although Bennett doesn't have impressive attack stats, his damage and healing bonuses along with good elemental control make him one of the best utility characters around. Moving on to Xingqiu, his elemental skills can provide DMG reduction as large elemental reactions, making him a fantastic under-DPS unit.

Kaedehara Kazuha has a lot of potential both as a DPS and as a support, with Anemo abilities that can hit your 473ur enemies, to create amazing elemental reactions. Kamisato Ayaka is also a great damage dealer, while his Cryo Affinity can be used for many reactions to wipe out all 473ur enemies.

Albedo has skills that make him more viable for dealing with hordes of enemies, Jean's versatility as a support and sub-DPS is fantastic for your team, with CC abilities and HP regen, and Qiqi has great skills. good attack stats as well as healing abilities that affect your entire team.

Kaeya is one of those characters who, after the main story begins, comes across another sword user, however, her cryo skills can come in very handy at times, and Keqing has some of the best stat combinations that , with her electro power, makes her an incredible hand-to-hand fighter.

Finally, Traveler's attacks can deal quite a bit of damage in its Electro variant, as well as some useful elemental reactions. Nonetheless, its Anemo variant can also be useful for some quick fights or when Pyro and Electro effects are on the table, and finally, we don't recommend its Geo variant, as there are plenty of more useful Geo characters.

And with that, our complete list of Genshin Impact characters has come to an end.

That said, you should expect everything to come in Genshin's 2.2 update, as your 473ur journey of Inazuma is still far from over.

In the meantime, be sure to check out our dedicated Genshin Impact section, where you can find all the news, guides, and previews you desire, as well as our Genshin Impact Twitter account.