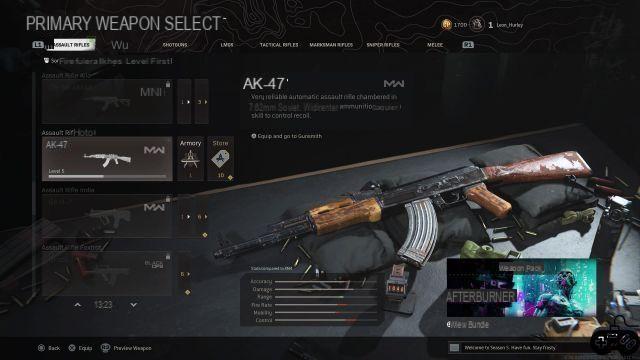 Call of Duty: Warzone Season 5 Reloaded is here and again many of the weapons and attachments in the game are subject to change.

In total, there are 12 weapons that have been upgraded or nerfed, from the Krig 6 assault rifle to the DMR 14 tac rifle, alongside eight attachments.

All but two of the DIY weapons are from the Black Ops Cold War arsenal, with the developers stating that some of these weapons proved too easy to use relative to their effectiveness and some were difficult to handle resulting in by poor performance.

As the developers explain in the patch notes:

“In evaluating the power level of BOCW weapons, we observed some disparities between usability and effectiveness,” the notes read. “The Krig 6 (BOCW) showed impressive performance at almost all engagement ranges. While we think it's important to have a wide range of weapons that can be used by players of all skill levels, it's critical to the health of the game that their effectiveness scales appropriately with the skills required to handle them. »

All weapon buffs and nerfs in Warzone Season 5 Reloaded

Rather than an outright “decline” in recoil, this change is more of an overhaul. The DMR 14 (BOCW) has languished since its changes in the first season, but it has not been forgotten. Expect the DMR 14 (BOCW) to feel like a new weapon. Semi-473matic weapon enthusiasts rejoice, as the DMR 14 (BOCW) could experience a real resurgence following this change.

All Attachment Buffs and nerfs in Warzone Season 5 Reloaded

Season 5 Reloaded sees changes to some barrels and a rear grip.

Check out our dedicated hub for more Warzone news and guides.

add a comment of Warzone Season 5 Reloaded: All weapon buffs and nerfs