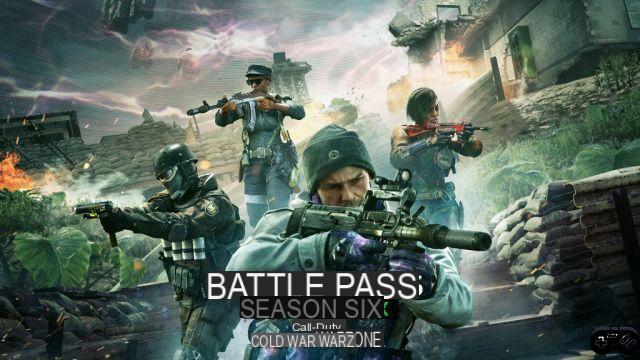 The sixth season of Call of Duty: Warzone is about to debut, and eager players are curious to know what this season's battle pass has in store.

Like all other seasons, this battle pass offers rewards for both free and premium tiers with rewards like the .410 Shotgun, Grav Assault Rifle, or the “Panda Bite” blueprint.

So stick around as we explore everything you need and want to know about the next season of Call of Duty: Warzone kicking off tomorrow, October 7th.

Warzone Season 6 Battle Pass Price: How Much Does It Cost?

Like every season, the pass will have one hundred tiers of rewards that you can unlock by paying 1 COD Points, some of these tiers will have free rewards like two new base weapons.

If you want to get into the competition, you can also purchase the Battle Pass bundle which will grant you the same privileges as the other, but it will also include 20 level skips (25 for PlayStation) and three bonus Operator skins: Panda Bear”, “Red Panda” and “Bread Panda”. You can still continue skipping levels by paying 150 COD Points.

As soon as you gain access to the premium side of the Season 6 Battle Pass, you will receive Tier 0 rewards which include:

If you're not really into the Panda-themed skins you get through the Battle Pass bundle, you'll also have the option to earn other Operator skins through tiers.


In the first 20 Tiers of the Battle Pass, you will be able to redeem two new Operator Skins which are:

Additionally, you will also unlock the “Axe Murder” finishing move at level 19 which will be available to equip via the Operator menu in Warzone or the Weapons menu in Black Ops Cold War.

Season 6 includes two new base weapons available through Battle Pass tiers, which will be available to you whether or not you have the premium version:

Just like in Season 5, we'll have twenty new Weapon Blueprints that will help you gear up with the firepower to defeat your opponents in Black Ops Cold War or Warzone.

We'll go over some of the Legendary Blueprints you can unlock through the Season 6 Battle Pass:

The "Kill Shot" has a unique airborne lever wrap, elongated magazine tube, and damage-boosting barrel that will deliver those high-damaging shots, making you less worry about slow reloads and keeping your eyes on the ultimate prize: victory. .

Designed to stand out from other Operator outfits, "Aurora Borealis" can light up the lobby when equipped as Mason's Operator skin and can aid your team's tactical movement around the map.

Finally, on these last levels we will also get another legendary blueprint for the Grav base weapon that we unlocked earlier, vehicle skins like the “Harsh Angle” or the “Dazzle Wagon” and a season emblem 6 to proudly display in the lobby.

Be sure to check out our dedicated section as we'll bring you everything you need to know about each COD Warzone from news, loadout tips and more.

Pet Simulator X: How to unlock the PogChamp achievement? ❯