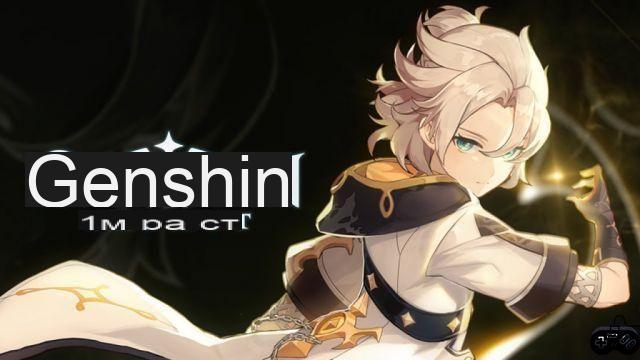 Head Alchemist of the Knights of Favonius, Albedo succeeds Zhongli as the other Geo character and does his best to make Geo viable. His abilities – especially his incredible elemental skill – make Albedo a top pick for any team looking for a sub-DPS or Burst Carry, though he's a powerful primary DPS choice if the mood strikes. takes it from you.

To get the most out of this latest 5* character, we're going to dive a little deeper:

As always, the first question to consider is which weapon to equip. Frankly, most 4*+ choices are pretty good with Albedo – either you get more damage (great) or you get lower CDs (also great) – and both routes allow for multiple playstyles. That said, here are a few -some of the most interesting and outstanding options:

The new weapon released on the latest Weapon Banner is unsurprisingly an absolute powerhouse on Albedo. Whether you use Albedo as your primary DPS or for his elemental skill and burst as a Burst Carry/sub-DPS, Summit Shaper's ATK% stat as well as Golden Majesty weapon ability is very powerful on the Alchemist.

Stronger shields - which are very easy to acquire through Albedo's abilities - as well as a stacking ATK amp with a shield make this weapon a worthy consideration no matter how you want to play Albedo, but try stacking Golden Majesty before using her elemental skills and burst. .

The other new sword that came with 1.2 is Festering Desire, and it's great on Albedo as well. Energy Recharge makes this a top option for a Burst-focused build, but it's still a great option for a primary DPS build (if only because Albedo has so much DPS built into his Elemental Burst).


Additionally, Festering Desire's Eternal Awe ability increasing DMG and Crit Rate for Albedo's elemental skill "Abiogenesis: Solar Isotoma" is also fantastic considering the power and duration of this ability. . This ability alone would make it an excellent weapon for Albedo.

To wrap up on Festering Desire, remember you get this weapon through The Chalk Prince and the Dragon event, where you can also strengthen and upgrade the sword – go for it Travelers!

The sacrificial sword loses power, if only because Albedo's elemental skill is only available on a 4 second CD, so you're not removing a massive cooldown like you would on a other character. Other than that, it's still a great choice for a Burst Carry/Supportive Albedo.

There are three main sets of artifacts running in various configurations for Albedo as it is: Archaic Petra, Gladiator's Finale et Nobility Obliges.

The most balanced options are either 2 Piece Gladiator's Endgame ou Noblesse Obligate with Archaic Petra 2 pieces. Much of Albedo's damage is geo-based, Archaic Petra's 15% Geo DMG buff is a no-brainer, while Gladiator's Finale offers more consistent damage via the 18% ATK amp against Noblesse Oblige boosting damage elemental burst of Albedo. Both will work however you want to play it, but Gladiator leans more towards a mainline DPS playstyle, compared to Noblesse leaning closer to a sub-DPS/Burst Carry style.


More extreme variants include 4-Part Gladiator Finale if you want to push for a high availability main DPS build for Albedo, or Noblesse Oblige 4 pieces for more team utility for a more favorable version. Likewise, if you're feeling daring, Trace Bolide with Summit Shaper can turn Albedo into a one-man army with some investment.

If you have trouble with sets, l’exil is okay as it is martial artist, but you should focus on the aforementioned combinations above.

By the Seven – NO! Albedo clearly has a twisted sense of humor (Picture: miHoYo).

Regardless of how you plan to play Albedo, his stat needs are pretty consistent. Here is a brief overview:

If you are lucky enough to reach Constellation Level 2, Albedo's Elemental Burst will increase DEF like his elemental skill, really increasing the priority you should place on the stat.

Albedo is quite simple – so satisfying – to play. You'll want to open up with his elemental skill, Abiogenesis: Solar Isotoma, before using his Elemental Explosion, Brood Right: Tectonic Tide, then switch characters or switch to basic attack depending on playstyle and skill. construction.

Be sure to keep enemies within the Solar Isotomy Field for maximum damage from his abilities – and do not launches his Burst without the field being active! This will ensure that as many Transient and Fatal Flowers spawn as possible with the corresponding damage. Albedo also doesn't need to be on the pitch for Solar ISotoma to work – switch if you've prepared your team for it!

Also remember that 'homuncular nature' increases the party's elemental mastery for 10 seconds after Albedo uses his elemental burst, so you can look to set up powerful reactions with other party members. in this spirit.

Another point to keep in mind is that the Solar Isotome itself (i.e. the geo flower in the middle of the ability) both counts as a geo construct for Zhongli and acts as an elevator if a character walks on it. It takes a bit of creativity, but the platform is a good evasion tool, a sniping point, and an easy way to set up for diving attacks.

As for teammates, Albedo works wonderfully with people like Zhongli et ningguang, especially with the Geo buff announced for version 1.3. Albedo sets them up to function as great DPS picks, adding more damage and shields to their kits or setting him up to do the transport for them. Both Geo traveler et Noelle are also good choices for similar reasons, but may require a bit more setup or need Albedo to be your main transport.

Albedo will also work well with most non-geo options – he adds a persistent AoE damage field that provides shields via crystallization and grants elemental mastery to the whole team via Homuncular Nature. It is really good. To consider double pyro to really make the most of Albedo damage via elemental resonance effects. When 1.3 hits, definitely consider 2x Geo and 2x Pyro for even more of that!

With that, our dive into the head alchemist of the Knights of Favonius is over! Have fun exploring Dragonspine and consider bringing Albedo with you.