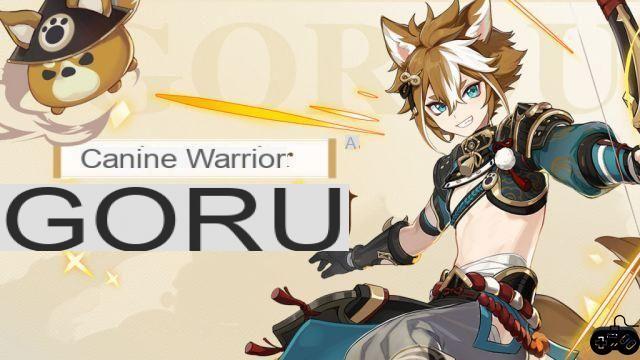 The first official details of Genshin update 2.3 have been revealed thanks to miHoYo, who, as they did recently before the release of a new update, announced in advance the characters that will arrive in the game, after Thomas' debut.

As has been speculated since Inazuma's introduction in Genshin Impact, this time two powerful characters will be arriving as part of the 2.3 update, one of them being the long-awaited 'Canine Warrior'. , Gorou.

Although this is the first time Gorou will be available as a playable character in Genshin Impact, it will not be this warrior's debut as part of the Inazuma region content, as he has already made an appearance in the within the Archont Quests based on the history of the Nation of Eternity.

As added by miHoYo during his reveal, Gorou is known to be the loyal and brave general of Watatsumi's army, tasked with leading the forces of the Sangonomiya Resistance against the shogunate and its former decree Vision Hunt.

Beyond his experience in combat and war strategy, Gorou is also known for wanting everyone on this island to live in safety and peace, in Gorou's eyes, the people around him are not just his brave soldiers, but they are also his beloved companions.

This is evidenced by the words Kaedehara Kazuha dedicated to him, demonstrating his friendship with this warrior by saying, “Kindness and loyalty are the representation of virtue. Without a doubt, my friend Gorou is a virtuous general. »

Gorou is rumored to be introduced as part of Update 2.3's second banner, along with the re-release of Albedo, a character that debuted when Dragonspine Mountain was added.


Even if Gorou will be a four-star character, there is no doubt that many players will try to grab him as soon as he is released, as his arrival is highly anticipated.

Since his primary weapon will be a bow, the options for effectively arming him will be varied, although a new such weapon designed for him is expected to be revealed as part of this update's content.

As for his abilities, it has been confirmed that he will have Geographic Affinity, meaning he will be a one-of-a-kind character, while his constellation will be known as 'Canis Bellatoris'.


As of now, no further details have been revealed about his skills and attacks, however, this is all expected to be revealed in the coming days with the launch of the game's 2.3 beta.

Gorou will be available with all content from Update 2.3 on November 24.

In the meantime, be sure to check out our dedicated Genshin Impact section, where you can find all the news, guides, and previews you desire, as well as our Genshin Impact Twitter account.