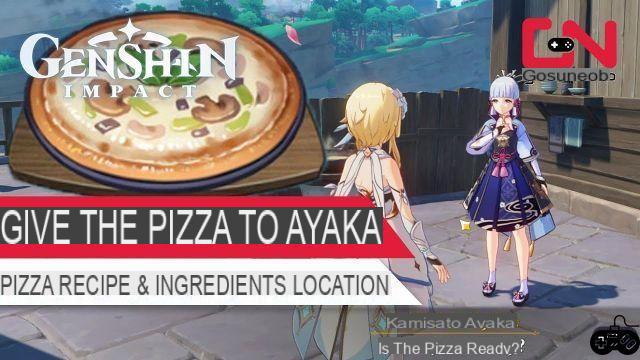 Genshin Impact 2.0 was released on July 21, 2021, with the highly anticipated Inazuma region now open to travelers. With a plethora of new quests to take on and several new characters entering the game, there's plenty to discover. Speaking of new characters, Kamisato Ayaka, a figure much admired by the people of Inazuma for his good looks, dignified attitude, and noble character, wants pizza.

If you're stuck playing pizza delivery, we've got a complete guide to Genshin Impact Mushroom Pizza Recipe, and how you can easily give it to Ayaka.

Genshin Impact Pizza Recipe: How to Get

Ayaka wants mushroom pizza, and you don't want to let down the princess of the Inazuma region, do you?

If you've progressed this far in Genshin Impact, you should already have the mushroom pizza recipe. Just be sure to scroll through your recipes to find the pizza Ayaka desires.

If you just don't have the mushroom pizza recipe in your cooking arsenal yet, you can find it in a valuable chest at Stormterror's Lair, just north of the tower. On your map, this location is just above the "o" in Stormterror's Lair, as shown in the image above.

There is a caveat! This final ingredient, cheese, is not easy to create. If you don't have cheese in your inventory, it can be processed using 3 Milk. It takes 10 minutes of real time to process the cheese.

Alternatively, we suggest heading to the town of Mondstadt and buying some cheese from the NPC Good Hunter.


Give the pizza to Kamisato Ayaka quest

Luckily, now that you know the Mushroom Pizza recipe for Genshin Impact, you should have no problem completing the quest.

Simply bake the pizza in the location shown in the image above and give it to Kamisato Ayaka to complete his quest.


In the video below, YouTuber Violet Skies shows how easy it really is to complete the quest. However, the content creator also notes that it's easy to miss that you already have the mushroom pizza recipe that Ayaka craves.

With this guide, your search for Mushroom Pizza Recipe in Genshin Impact should be over. Simply give the cheese food to Kamisato Ayaka and watch her consume it.

In the meantime, don't forget to join our community of travelers on our Genshin Impact Twitter account, where you'll find tips, tricks, guides and more.