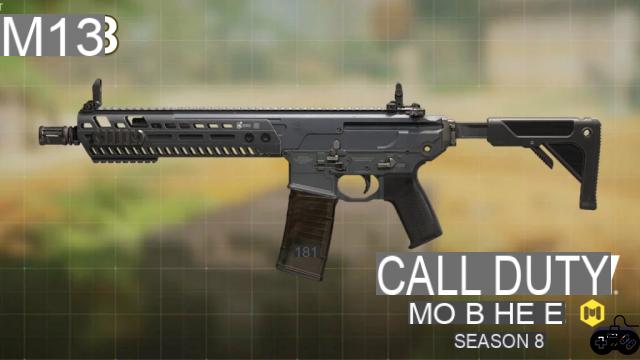 The COD Mobile Season 8 “2nd Anniversary” update has finally arrived and introduces two new weapons to the game: the M13 Assault Rifle and the R90 Shotgun! Along with these weapons, there's also a menu of new content and gameplay changes, including an all-new "Blackout" map, new Scorestreak and Perk, and several weapon balancing changes.

The COD Mobile Season 8 patch notes describe the M13 as an assault rifle with "an extremely high rate of fire and a powerful headshot multiplier." This powerful weapon hails from COD: Modern Warfare and recently joined the Assault Rifle arsenal in COD Mobile. Here is the best Gunsmith class setup for the M13 at the start of COD Mobile Season 8.

While we haven't ranked the M13 in our Assault Rifle tier list yet, we expect it to shake up the meta quite a bit.

The following loadout was derived from the Bobby Plays YouTube channel which used this Gunsmith class setup in the test build server.

The choice of barrel attachment is arguably the deepest part of this loadout. We went with the RTC Heavy Long Barrel for ADS bullet spread, damage range, and recoil control buffs. This will slightly decrease movement speed, ADS movement speed, and ADS time.

Then we went with Out of stock attachment to mitigate the drawbacks of the previous attachment, including improvements to ADS time, movement speed, and ADS movement speed.

In order to fight against ADS bullet spread drop, you can attach the Granulated Grip Tape Rear Grip attachment. We have also equipped the classic OWC Laser Tactical for further improvements to ADS time and ADS bullet spread.


There is a good selection of ammo to choose from. We went with the .300 RTC 30 Rnd Reload to give us an additional 20% damage range increase, although you can also opt for the .300 RTC Double Pile 30 Rnd if you also need additional magazine capacity.

And that completes our Gunsmith Class setup for the M13 in COD Mobile Season 8! We're curious how this loadout works for you, so let us know what (if anything) you'd change by tweeting us on Twitter.

Don't agree with our upload? Well, get ready for more disappointments by checking out our level guides for Assault Rifles, SMGs, and Submachine Guns, which rank all the weapons to use in COD Mobile Season 8 from best to worst.

Don't forget to check our dedicated COD Mobile section, with all the news, guides, weapon tier lists, loadouts and more.