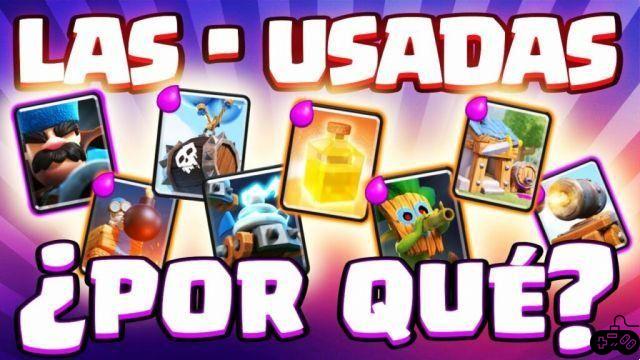 One of the most common inconveniences is bringing new cards in Clash Royale and this is coming back against Supercell as seen with the case of the Royal Recruits, too powerful in their first week of life without even coming into the game and now absolutely reviled by the players, being the least used card in the ladder with a absurd percentage.

Many users want to know what are the least used cards in Clash Royale, in order to be able to avoid them and be able to take advantage of the ones that are really worth it in the game. So if you are one of the many users who want to know them, you are in the right place! Since, now we are going to explain it to you in detail.

The purpose of Clash Royale It is completely unpredictable, but it is true that in recent months the Sepercell team has not been fully successful in certain recent entries in the game and that is that the last 3 cards included are among the 6 least used in the game in ladder, a perfect example how difficult it is to change the situation today.

Furthermore, the Royal recruits they have been the last to suffer this process and after appearing with six elixir and becoming the most used card even ahead of spells, it was lowered with two more elixir points, which has unquestionably put it in the area down from the table.

Along with the Recruits are the Royal Pigs and the Giant Snowball, two options that have not worked at the moment. The first seemed to come in as a new victory condition, but its extreme weakness against cards as used as the log, have completely left it out of the meta.


Now, in the case of the Giant Snowball card It is completely different, practically nobody uses it and it goes completely unnoticed, although it was expected that it would be the alternative option to the Download or the aforementioned Log, which continue to be the kings on the list.

add a comment of Least Used Cards in Clash Royale