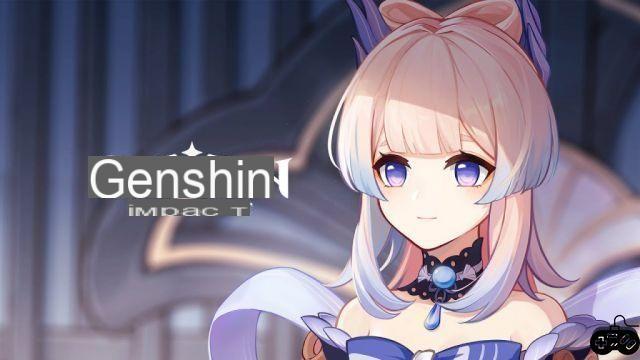 Since arriving in September, Genshin's 2.1 update "Floating World Under the Moonlight" has brought tons of new features to the game with the addition of Watatsumi and Seirai islands, as well as a fishing system, powerful bosses , and finally, four other characters.

Now, with Phase II about to begin, the Raiden Shogun and his loyal servant Kujou Sara will both say goodbye to Limited Banners, making way for the beginnings of a new adventurer.

Originally from Watatsumi Island, she is known for her delicate and graceful way of being, but inside she hides a very tactical and skillful person, as she is the leader of a resistance that fights against the goals of the shogunate. Introducing the “Pearl of Wisdom” Sangonomiya Kokomi.

To talk about the origins of Sangonomiya Kokomi, we must go back to the time when the inhabitants of Watatsumi Island lived in an underwater civilization, known as Enkanomiya. The legend says that "only by the grace of the god Orobaxi who brought them to the surface, the people of this place exist today".

Most people in Watatsumi can see this every day, as Orobaxi's skeleton gave birth to the Tatarigami region, after being killed by the Electro Archon during the Archon War. Since that day, the Sangonomiya clan has dedicated themselves across generations to protect the island, no matter the cost.

As the current heiress of this lineage, Sangonomiya Kokomi inherits the will of a god in the body of a mortal, thus her role as Divine Priestess. Still, even though her appearance makes her look like a peaceful person instead of a war commander, don't let that fool you.

A crucial element in the total protection of Watatsumi Island, the "Pearl of Wisdom" has shown all its talents as a born leader, developing the region as a whole through its directives, taking into account all possible scenarios. supported by her. extensive knowledge of military strategies and the art of war.

His normal attack, the Form of Water, allows him to perform up to three consecutive strikes, taking the form of a swimming fish and inflicting Hydro DMG. With her charged attack, she can consume Stamina to inflict Hydro DMG in a larger area, after a short cast time.

With her elemental skill, Kurage's Oath, Kokomi will summon a "Bake-Kurage" created from water that inflicts Hydro DMG on surrounding opponents, but also heals nearby characters based on her max HP at intervals fixed. Doing this skill will also apply a Wet status to it.

With her Elemental Burst, Nereid's Ascension, Kokomi will summon the power of Watatsumi, inflicting Hydro DMG on all nearby enemies before dressing her in Sangonomiya's Flowing Water Ceremonial Vestment.

This Ceremonial Garment will increase its Interrupt Resistance and Normal, Charged, and Hydro DMG, based on its Max HP. Whenever her attacks hit opponents, she restores the HP of all members of her party, and finally, it will also give her the ability to walk on the surface of water.

Starting with the best 5-star weapon, a new catalyst will be available to coincide with its debut known as Everlasting Moonglow. This weapon is part of the Inazuma series, shining with pure moon-like radiance, and ever so distant, being the signature option of the Divine Priestess.

Finally, we have to suggest this 3-Star Catalyst, as it brings a lot of potential if you're looking to build it more as a support rather than an under-DPS. Since this weapon is very easy to obtain through the game's wish system, getting it at max refinement won't be a problem for you.

It comes with a unique skill called Legacy, which allows when switching characters, the new character taking the field will have their ATK increased by 24/30/36/42/48% for ten seconds. This effect can only occur once every 20 seconds.

As a primary choice for her Artifacts if you want her as a sub-DPS, we'll recommend the Heart of Depth set, as it will boost her damage by giving a 45% Hydro DMG bonus when she has two.


If you manage to get four artifacts from this set, once you use an elemental skill, it will increase normal and charged attack DMG by 30% for 15 seconds. Parts of this set can be obtained in the Vindagnyr Peak area on Dragonspine Peak.

You can also combine it with the Maiden Beloved set, for a 15% bonus to character healing efficiency.

The best option for her as a support is the Tenacity of the Millelith set, as it will enhance the potency of her elemental abilities by increasing her HP by 20% when she has two pieces of this set.

With four pieces, each time an elemental skill hits an opponent, the ATK of all nearby party members will be increased by 20% and their shield strength will be increased by 30% for three seconds. This effect can be triggered once every 0,5 seconds, even when the character using this artifact set is not on the field.

Parts of this set can be obtained from the Ridge Watch estate, located in the mountainous area that connects Mondstadt and Liyue.

As for the stats, they will be focused on raising his HP as high as possible, while also giving him plenty of energy recharge and elemental mastery to trigger all of his elemental abilities faster, making you and your team virtually immortal. :

Sangonomiya Kokomi was developed to be a very flexible option, whether you need a good Sub-DPS unit to create big elemental reactions thanks to its Hydro affinity, or a fantastic support with a lot of power to healing that can help your team survive every battle.

So, to complement his playstyle, you can choose between the following characters depending on what suits you best for battle:

And that's all we have to share with you about Sangonomiya Kokomi. Remember that she will only be available from September 22 to October 13 in the “Drifting Luminescence” banner, so try to save as many Primogems as you can.

In the meantime, be sure to check out our dedicated Genshin Impact section, where you can find all the news, guides, and leaks you desire, as well as our Genshin Impact Twitter account.