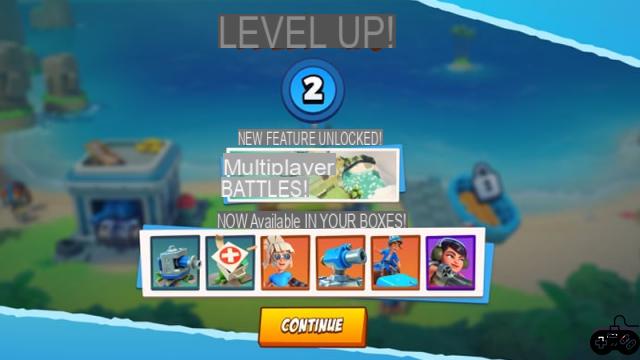 Supercell's new mobile game, Boom Beach Frontlines, is finally available in Canada! For other countries, it is possible to access it through a VPN. The principle is simple: make Battles as a team to try to obtain rewards and be able to upgrade your base and your cards.

When starting the game, you will notice that you are with and against bots, and not in a true multiplayer mode. This is normal, since the the game's multiplayer is not available from the start ! Must have finished the tutorial et reached level 2 to start playing with and against real players.

How to unlock multiplayer in Boom Beach Frontlines?

The multiplayer mode will therefore unlock quite quickly in Boom Beach Frontlines. Indeed, it is after completing the tutorial called “Bootcamp”, and reached level 2, that you can do Battles in multiplayer. You will finally be able to face real players!

If you don't know the Battles on Boom Beach Frontlines, they are simply team games, in which you will have to face another team. The game maps change regularly, and the goal is to capture point A and point B on each card. Once both points are captured, you will have won.


You will obviously have to defend these points, or try to attack them if they are taken by the opposing team.

Biomutant mutations, how does it work? ❯

eFootball PES 2022: Who are the best players

Biomutant character creation, which appearance and traits to choose?

Job Reaper in FF14, location of the class quest in Final Fantasy 14

add a comment of Multiplayer Boom Beach Frontlines, how to unlock multiplayer?