The Fortnite Rift Tour will launch from August 6 and is expected to feature international superstar, Ariana Grande. This follows Epic Games' announcement that the next Fortnite event will feature a "musical journey into magical new realities, where Fortnite and a record-breaking superstar collide".

There are also several 473ur plastered posters from Fortnite that hint at the upcoming concert. We now have the opportunity to take a look at the exclusive Ariana Grande Icon Series skin set and release date, following recent data miner leaks.

You can watch the skin in more detail in the video below.

This skin design is different from an earlier concept model, which you can see below. It's also possible that it's just a different variant of Ariana Grande's Icon Series skin.

iFireMonkey also revealed statements regarding the collaboration, from Ariana Grande and the Epic Games team. Ariana said that "working with Epic and the Fortnite team to bring [her] music to life inside the game has been so fun and such an honor."

iFireMonkey @iFireMonkey Some quotes from Ariana Grande and Phil Rampulla regarding the Rift Tour experience: https://t.co/TUlMZILRbr 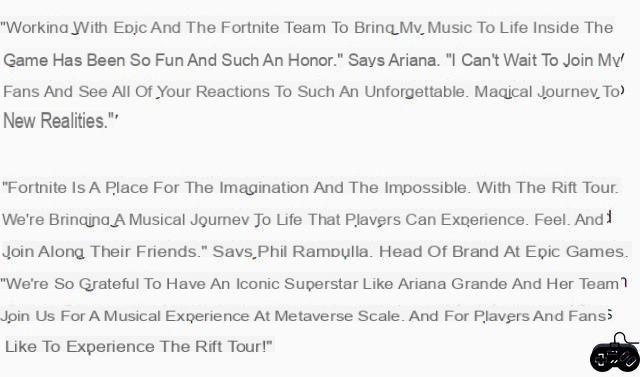 “We are so grateful to have an iconic superstar like Ariana Grande and her team join us for a Metaverse-wide musical experience, and for players and fans to experience the Rift Tour,” said Phil Rampulla (brand manager at Epic Games).

Ariana Grande will arrive in the Fortnite Item Shop on August 4 at 20 p.m. ET or 1 a.m. BST. The bling backpack you see in the video is called "Piggy Smallz".

It is also confirmed that most event files will be added in Fortnite patch 17.30 which will be released in the next 3 days. Also, the next Rift Tour event will be a concert event (not a scenario event).

We don't know what Ariana Grande's setlist will be for the Rift Tour concert, but we suspect it will likely include songs from her recent album, "Positions," which she is currently promoting.

We look forward to the event and are sure it will be positively received by fans, just like Travis Scott's "Astronomical" event.

Be sure to check out the exclusive Rift Tour Live event leak video by iFireMonkey below for more information on the upcoming release.