Well, PubG Mobile Lite does not appear in the Google Play Store 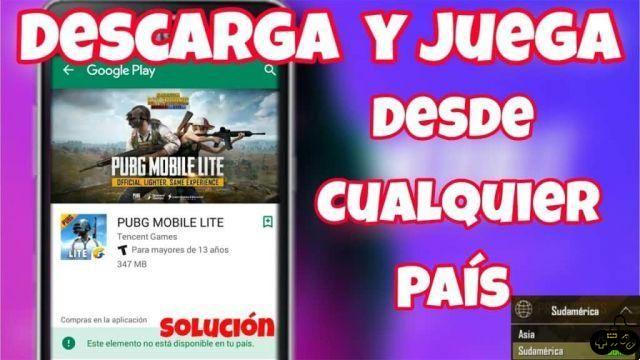 PubG Mobile Lite is a shooting game that has been a sequel to the VO of PubG on mobile devices, which was available for a certain period of time in the Play Store and App Store, urging the entire community of players who have a phone or Tablet medium / low range to continue enjoying this magnificent shooter.

Many players from the community of PUBG Mobile They have notified that it is no longer possible to get the game on the Play Store, since they have searched for it in many ways and only the VO appears, which is why a controversy of beliefs has been generated in the different sets of PubG Mobile. In the article, we are going to explain why PubG Mobile Lite does not appear in your Google Play Store.

Possibly, one of the most common drawbacks that the community of players who love PubG Mobile present is that the Lite version is not available in their area, this game optimized for low-end mobile devices is only available for certain locations chosen with the least download rate today, including countries in South America and North Africa.

Why is PubG Mobile Lite not appearing in the Play Store?

In case you are not a part of this area you can achieve it through another site. Apart from that, we invite you to use a VPN so that when you use the game it does not send you the location error when you log in. You can download any application in the Google Play Store to access the VPN where PubG Mobile Lite is free and use it without any inconvenience, since it will work as a third party and will not harm your gaming experience.


At the moment it is thought to close all kinds of servers for PubG Mobile Lite, since the developers of the game no longer consider it feasible to have a lower quality platform absolutely equal to the original game, so it is entirely possible that the game will be removed in the future. coming months, for the time being no statement has been issued.

Well, PubG Mobile is not compatible with my cell phone ❯

add a comment of Well, PubG Mobile Lite does not appear in the Google Play Store