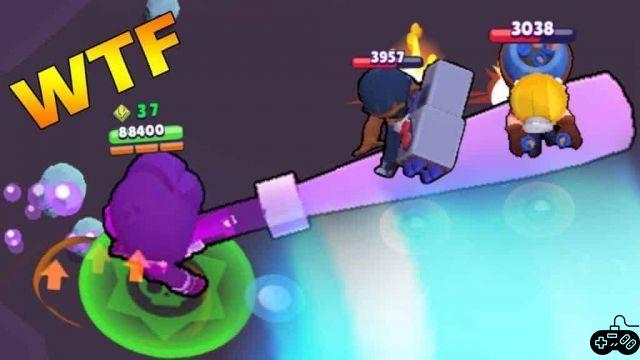 Unblocked games wtf Brawl Stars It is becoming a very popular platform among people who want to play and be entertained quickly, while playing games that do not demand much attention and are as entertaining as possible.

Among these many games we can find brawl stars, the popular Supercell game, has a public version on this website and It is one of the most popular among users who frequent the page.

As soon as we enter the page and search for the game we can see that we enter a loading screen, which tends to take a while, and after entering we will enter the menu and choose the character that we like the most. Today they have two free. Upon admitting you will find an available room in order for you to play, and you are going to enter against other players, who will try to win the game.

Already in the game has similar mechanics to the original game of supercell in which you will have to kill other players and collect their elixir and the one who harvests the most will win the game.

The controls to play are quite simple, with the keys W, S, A, you are going to move the player and with the mouse you will aim quickly, and giving the left click you shoot, something that is very similar to the original game is that you have three bullets that will be reloaded constantly.

Although it is a game inspired by the well-known brawl stars, it doesn't come close to the original game at all. It has a very orthodox mechanics and with very little mobility, apart from the fact that the map is very small and not very immersive. Simply a medium square in which you are going to have to kill your other opponents just as if you were a survivor.


The characters are nothing like the original game. and they only have two alternative options, so in general it is not a very immersive game, and nothing similar to the very popular Supercell game.

While is a great free alternative option and that can provide you with enormous fun for a few minutes is not at all loyal to the original and does not give you the freedom or gameplay that you could expect with the title that they offer you.

However, to hang out and distract yourself from the long days of work, it is ideal, it does not offer you much care, and the competitiveness is almost nil. So don't wait any longer and enter this planet. Also the web has more than fifty games designed for fun and fun for all.

We hope this article has served you and you can get the most out of unblocked games wtf brawl stars. We recommend that you continue reading more articles related to the planet of brawl star, as many other games on our official page.

Use of Coin Master Data ❯