The Worst Cards in Clash Royale 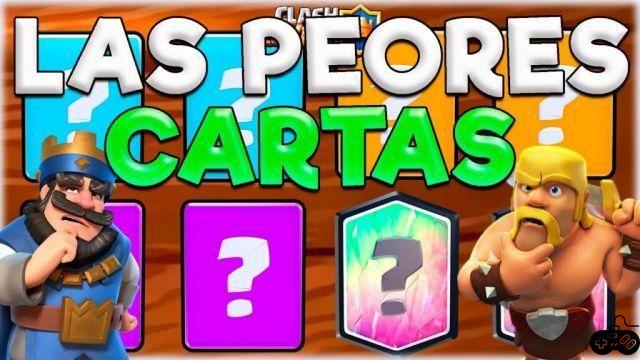 Decide what letters are useful or truly essential to each and every deck, it's just too complex a task. It involves trial and error, and sometimes balancing cost against damage can be a very difficult task.

It is for reasons like these that most players simply decide to copy decks from top players, or from players who post their strategies on YouTube or some other social network. But why aren't certain cards played? It is wrong, but Supercell has not given it the precise utility. For this reason we will show you the worst Clash Royale cards today.

The Worst Cards in Clash Royale

It is not difficult enough to guess from the fact that this letter is not so used nowadays, the house goal is more than dead, this due to the incessant appearances of new cards that have completely unbalanced the meta. It has too many counters, added to its high cost and that are partially easy to deal with in any cup. They transform it into a letter to prosper.

Bombard Tower was one of the best cards early in the game, making it a vital card to suppress large numbers of ground opponents. Sadly, the appearance of many high level area cards pushed tower bombs into the background.

The one so loved by the community and at the same time so little played in high cups, yes, we are talking about the great spark. The enormous inconvenience that is its great slowness and what it takes charge attack. In addition to this, it is also not compensated with much health, so it is a simple prey for the pekka. We hope that supercell will bring us a rework and make this beloved unit more useful.

The least used card in the history of clash royale, which after multiple buffs, continues without raising its head and showing the enormous potential it has. It is very complicated to give the complete calculation since it tends to get out of hand. How will they be able to use it? We do not know, the truth is that today, there is no useful deck that has a tesla tower in it.

The terror of low drinks, the nightmare of many, and in turn when you go up from drinks, the laughter of others. A priori, his ability is quite useful, since when he dies it explodes and causes damage in an area. But your counter is so simple how to fix a unit in the back so that it gets distracted and explodes out of the hit points of your essential units.

The terror of many when it came out for the first time in clash royale, little by little it was disappearing, but not because it has a bad damage, or little utility. The drawback is that is a unit of cost 9. And this breaks your vulnerability, and you emanate over quite a long time. badly played nine of cost can be to lose a tower or the game directly.

Although, these cards can be found in some deck scattered around. It is very rare that they are in high cups, and even some of these, in low cups. I wish Supercell them of the utility what they really require.

We hope this article has served you and you know what they are worst clash royale cards. We recommend that you read our articles related to the planet of clash royale, like many other games on our official website.

add a comment of The Worst Cards in Clash Royale