The Golden Kingdom Rise of Kingdoms 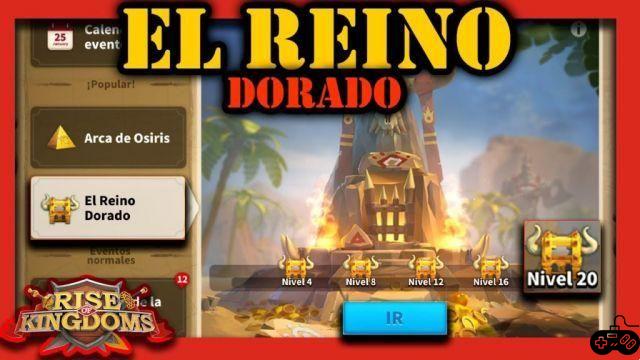 Rise of Kingdoms is a game in which you try to get resources to progress your troops, invade villages and even expand your land. If you don't know anything about the golden kingdom of Rise of Kingdoms, in this little guide we will tell you each and every one of the things you have to know.

The golden kingdom is an event of Rise of Kingdoms which you can access to earn certain rewards. This serves to break the monotony of the game a bit, apart from the KvKs. Thus, you keep yourself entertained while you play in a completely different mode.

The Golden Kingdom Rise of Kingdoms

The first step you must complete when joining this event is to select your troops. Be very careful here, since the complexity of the event will depend on the power of each and every one of the attackers you choose. Be wise, and learn to select.

The good thing is that you can choose the troops you want, regardless of whether you have them unlocked or not. Just focus on learning how to use each and every one of them, and not doing any kind of combo with troops that doesn't synergize with each other.

You will also have to be somewhat aware of the troops you choose, and make a projection of what they are capable of, due to the fact that you will not be able to change them until the moment the event ends. Focus on creating a composition that works both to attack and to protect, made up of melee and ranged units. Here, healing abilities are also essential.

Now it only remains to fight. Every four levels that we win, we will get certain rewards and bonuses that will help us pass the event. You must first part the mist, in which there is a chance for a guardian to appear. In the case of appearing, you must fight against him to free the area around him. Finally, beat the shift boss to go to the next level.


After defeating the guardians, you will be able to receive blessings, which are extra abilities that apply to the entire team, and that can be used to pass the event faster and with greater efficiency.

add a comment of The Golden Kingdom Rise of Kingdoms