Author and references
Find a list of all the codes available on the Roblox Arsenal game, allowing you to easily recover skins, currency and announcers. To thank you for your loyalty, we offer you to win 800 Robux (10 euros) on the Discord server of our partner Roblox France.

The various lists list all of the codes available, or which have been, classified according to their date of appearance on Arsenal de Roblox. These codes allow you to recover different skins, currency or announcers which, for the latter, are voices that can be activated at the start of a game, when you perform a headshot or during a victory. However, note that the codes are case sensitive, so be sure to correctly respect the upper and lower case letters present.

How to activate codes in Arsenal?

If you want to activate codes on Arsenal, in order to retrieve some skins, virtual currencies or game announcers, you just have to click on the Twitter icon, located at the bottom left of your screen, on the main menu. 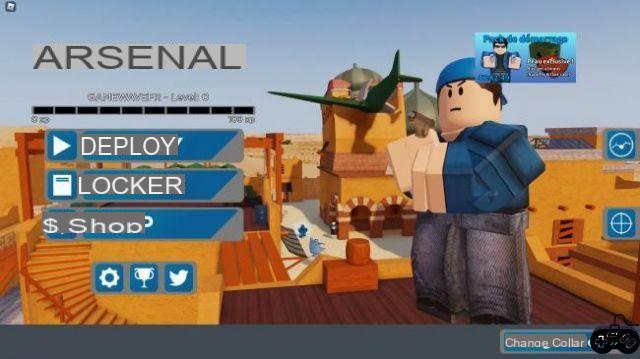 This action should allow you to access the “Promocodes” section in which you will only have to fill in the field where “Enter your code here!” is written. » one of the many codes present in the list above before clicking on the green “Redeem” button. Of course, you can only enterone and only code at a time and repeat this action as many times as necessary and collect coins and skins that will help you make your character much more classy withinArsenal.

Arsenal, what is it?

Arsenal is a game belonging to the ROLVe studio, created in 2013, which brings together several developers from all over the world. Created on August 18, 2015, Arsenal is one of the most popular titles on the Roblox platform. The game, which is inspired by licenses such as Counter-Strike, offers modes where several teams compete in closed maps on which players must eliminate their direct enemies in order to change weapons, like the Race to the armament on CS, until the ultimate golden knife.