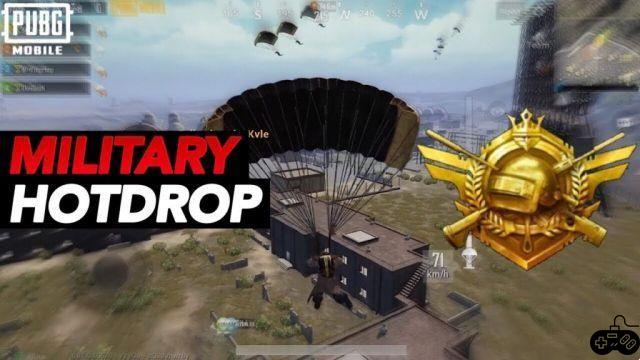 If you follow certain streamers from PUBG Mobile, you will have heard them talk about the hot drop. This term is a part of an internal language that has been created among Battle Royale players, and it makes sense even to say it outside of PUBG Mobile. As we have said previously, a hot drop is a term used generally in the Battler Royale genre, popularized by streamers. It is simply about landing in an area that is famous for having enough loot for enough players to land there.

The term actually comes from a US military expression that refers to the exact same situation, a danger zone. Its textual translation is red fall, which implies that it is a place inhabited by many people.

In PUBG Mobile there are enough hot drops to say that the area is completely infested with players. While landing on one increases the chance of you winning a match, it also makes surviving at the very start of the match quite difficult.

And it is that most players die while in the hot drop, so that in the end the last ones standing in the area take all the loot.

PUBG Mobile hot drops are essential due to the fact that they have the most loot on the entire island. In truth, dropping here is the only way to ensure that you're going to have a good weapon for the rest of the game. Be careful with the areas where you fall, as they could be infested with opponents.

The main hot drops of PUBG Mobile they are Pochinki, the school and the Sosnovka military base. One good thing to know is that Yasnaya Polyana has a good amount of loot, but it's not a red zone. Not enough people usually drop there, so you should use it as a drop point in your next games.