How to Make the Molotov Bug in PubG Mobile 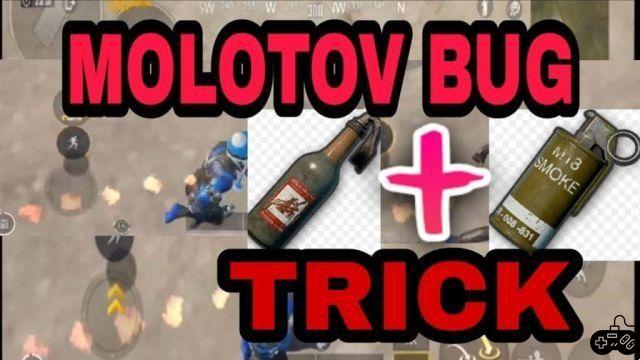 Molotov cocktails are bombs made with homemade products, with the goal of making a huge explosion that can expand due to the amount of flammable liquids they contain. It is a mixture of gasoline, stones, and other oxidants in a glass bottle, originating from many wars in Spain. Being a very iconic pomegranate in European history, it was added to the PubG Mobile like a grenade with a huge expansive force, with which you can suppress a group of opponents if you find yourself in trouble.

Many users have wondered how they can bug it, in such a way that they can lie to the opponents by throwing a grenade that is not the Molotov and they can stop taking cover. Today we bring you the mechanics made to be able to bug the well-known Molotov cocktail in PUBG Mobile.

How to do the Molotov bug in PubG Mobile

The first thing you should do is go to the main settings of the game, and enable the option of the fast change of grenades. After it is activated you will be able to have the option to supervise the plurality of grenades that you have found on the map, among them will be the Molotov, now, how can you do to bug it and lie to your opponents?

Well, it's very simple, you press the Molotov grenade with its respective timer as if you were going to throw it, and quickly with the grenade change button you change to a smoke grenade, in such a case it would sound like you were sending your opponent the explosion of a molotov, but really what you are going to do is spread the smoke and your opponent comes out from where he is covered, there you will be able to truly launch your molotov grenade and end his chances.


This technique is also applicable with other types of grenades, follow all our quality content so that you can learn the best mechanics in the game. PubG Mobile.

How To Do The Witness To The Truth Achievement PubG Mobile ❯