Author and references
Genshin Impact 2.3 update welcomed the arrival of Geo user Arataki Itto and added another unique character to the game's growing roster. of character and hope to acquire the 5-star character, there have also been rumors that one of his associates may be joining the fold.

Eagle-eyed fans have spotted mentions of Kuki Shinobu in Itto and Sayu's voice lines, but what does it all mean? We've sifted through all the rumors and leaks to find everything you need to know about this character in Genshin Impact.

Who is Kuki Shinobu in Genshin Impact?

According to a source, Kuki Shinobu is the deputy of the Arataki gang, led by Itto. The source also claims that Kuki released Itto from prison several times. Also, if you've played Itto's story quest, this information seems compelling that we might see Shinobu free Itto from prison again.

SaveYourPrimos 💎🙌 (225/225 for Mistsplitter) @SaveYourPrimos Kuki Shinobu (久岐忍) is the deputy of the Arataki gang. Shinobu seems like a more rational and responsible counterweight to Itto's cheeky personality. They say she wears a mask. Unconfirmed leaks suggest she is a 4✰ using the teen female model (Sucrose, Yanfei). https://t.co/fZdgZbkICE 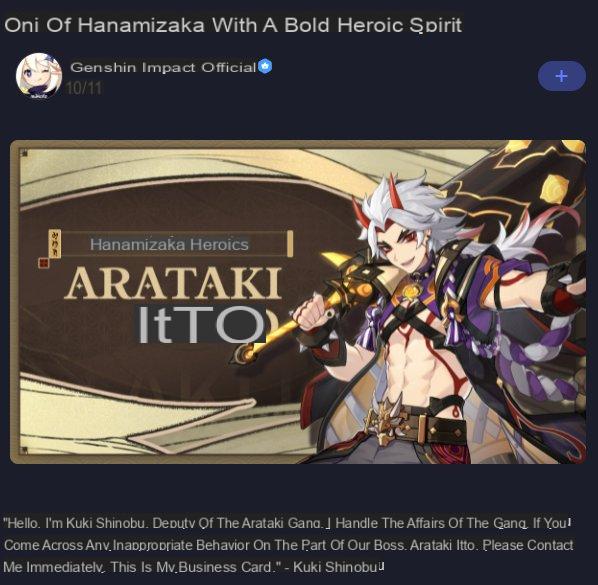 Kuki Shinobu is more level-headed and responsible than Itto, who is charismatic and chaotic. Therefore, some might say that Kuki Shinobu is the true leader of the Arataki gang instead of Itto.

lead it every hour at 🌹 @ittohourly ITTO VOICE LINE ABOUT KUKI SHINOBU https://t.co/XkEsjkroeI 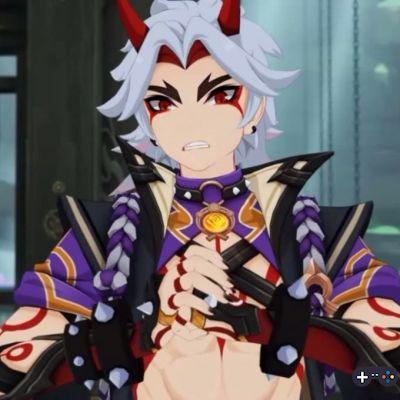 While in Inazuma, a conversation with NPC Doushin Uesugi may have referenced Shinobu as he discussed the rematch between Itto and Kujou Sara, saying, "Anyway, the duel didn't have a place at the end. Arataki was taken away by a masked lady. .. I just hope Madame Sara won't be affected by this…”

Not only does this assume she's wearing a mask, but it looks like she'll be of some importance in the feud between Itto and Kujou Sara.

In case you're wondering what Kuki Shinobu will look like, Genshin Impact source suspects that she could be featured with a teenage female model similar to Sucrose and Yanfei or a child model like Qiqi and Sayu.

What will Kuki Shinobu's playstyle and element be?

While it doesn't seem likely that the developer will use a child model for Shinobu, there is a strong suspicion that Shinobu could be a 4-star character. Additionally, unidentified leaks and speculation regarding her playstyle suggest that she will be an Electro user; However, there's no word on what weapon she's likely to use.

Many fans speculate that Shinobu has the potential to be an explosive DPS character, keeping in mind that she is the deputy of the Arataki gang, and Itto himself would not allow anyone weak to mishandle the affairs of the gang.


Other sources suggest that she might appear on Yae Miko's Character Event Wish Banner, which means Kuki Shinobu's release date might be sooner than expected.

The introduction of the Character Event Wish-2 banner style allows the developer to add more characters to the game, giving players more chances to wish for 5-star or 4-star characters. With the Genshin Impact 2.5 update still on the way and nothing confirmed on Shinobu's gameplay yet, we'll want to keep an eye on it for future leaks.

Image courtesy of Twitter/Nahaki and miHoYo.