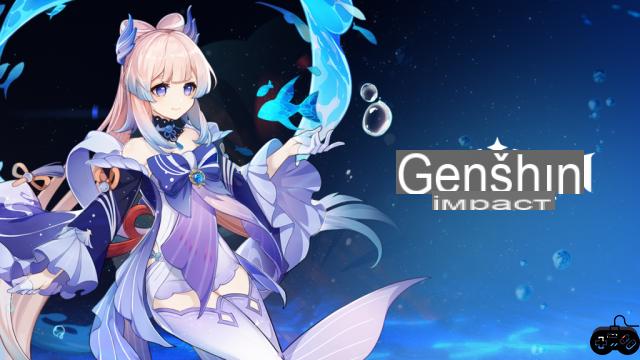 miHoYo has officially unveiled its roadmap for Genshin Update 2.1 Phase II “Floating World Under the Moonlight”, with some of its features and events coming to the game very soon.

Let's take a look at the next two banners announced in their dev blog, which will bring the debut of the Divine Priestess to Watatsumi Island, as well as a new legendary weapon specifically designed to boost her power.

Sangonomiya Kokomi, also known as "Pearl of Wisdom", will be the featured banner character of this cycle, being a powerful five-star catalyst character, with impressive hydro abilities that can both fully heal your party in a few seconds, and take on hordes of enemies with ease.

With its addition to the game, the following four-star characters will also have a huge drop rate, meaning if you're lucky enough you can get one of them and level them up without wasting too many Primogems.

You can read more about Sangonomiya Kokomi, along with our recommendations for weapons, artifacts, and even some tips, in our in-depth character guide.

As part of Kokomi's debut, her signature weapon known as the Everlasting Moonglow will be added to the game, with a special passive that increases healing and normal attack DMG based on its wielder's max HP, while by increasing energy recovery after using an elemental burst. .


Additionally, the Primordial Jade Cutter will also return to the featured weapon banner, a ceremonial sword masterfully carved from pure jade that boosts HP and provides bonus ATK based on the wearer's Max HP, being an option perfect for characters like Kamisato Ayaka.

During the event wish, the following four-star weapons will also have a drop rate increase, so if you're looking for one of these for your characters, this is your best chance of getting them.


Don't forget that with the arrival of the 2.0 update, miHoYo introduced the Epitomized Path, a banner mechanic to get five-star weapons in Genshin Impact based on the number of pulls you perform and the weapon you are looking for.

That said, bring all the Primogems you have, or start looking for them as soon as possible, as both banners will be available for a limited time, from September 21 through October 12.

Be sure to check out our dedicated Genshin Impact section, where you can find all the news, guides, and previews you desire, as well as our Genshin Impact Twitter account.

Genshin Impact Cinnabar Spindle: How to Get, Stats & Ascension Materials