Fortnite Mythic and Exotic weapon locations: Where to find them in Season 8 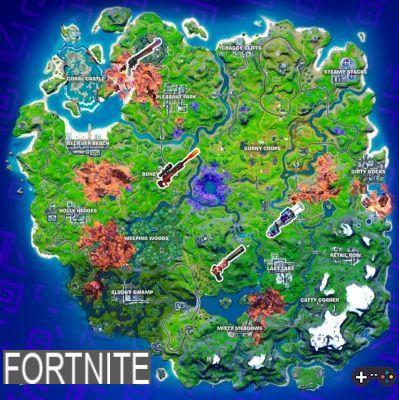 Fortnite Season 8 has kicked off with a bang, adding a number of new NPCs and even a bunch of former Citizens from the previous season. With that in mind, Epic Games has allowed the purchase of Mythic and Exotic weapons on the revamped Fortnite island. However, finding the purchase points for these weapons is a tedious task unless you know their exact location. Therefore, this guide lists all Mythic and Exotic weapon locations in Fortnite Season 8.

Typically, Exotic Weapons can only be obtained by trading Gold Bars with certain NPCs. So make sure you have enough resources in your inventory before initiating a trade. On the other hand, Mythic Weapons can easily be acquired by hunting down specific NPCs on the island.

Here is a list of all Mythic and Exotic gun locations in Fortnite Season 8:

We know that there are very few Mythic and Exotic weapons available in the game at the moment compared to previous Fortnite Seasons 5 and 6.

However, based on the latest reports and leaks, we're relatively sure that the developers will soon include more powerful weapons in Fortnite's ever-growing weapon pool. We will also update this guide in the future once new Exotic and Mythic weapons are introduced to the game.

So there you have it, what you need to know to find Exotic and Mythic in Fortnite Season 8.

In the meantime, check out our dedicated section for everything Fortnite, from news and leaks, to guides, dramas and more.

Fortnite Gamora Cup: How to register, schedule, format and price

add a comment of Fortnite Mythic and Exotic weapon locations: Where to find them in Season 8