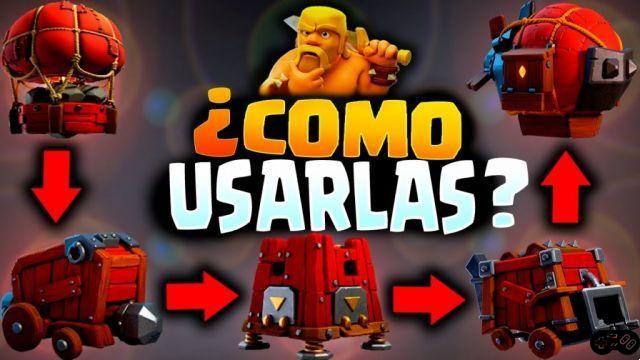 Clash of clans It has a diversity of characters and troops that depending on the situation will be more or better convenient. Among the many troops that we can find in the game is the siege machine. The siege engines Clash of Clans they are unique units designed to transport troops that you have in the castle. Depending on their utility, you find multiple types of troops.

Among the clash of clans siege engines we can find the following:

It is a unit responsible for destroying everything in its path, In addition to this, it is useful for transporting units from the castle to the central part of the opposing village. As a primary characteristic, it is invulnerable to spells and has countless lives.

The airship takes charge of evading ground obstacles and lead the castle troops directly to the center of the opponent's village. This is achieved while dropping bombs throughout the route, as a great disadvantage is that it is very easy to destroy, even being immune to spells.

A large unit that is in charge of destroying the protective structures thanks to the large stones it throws. In addition to this causes earthquakes and is immune to spells.

The log thrower is from the most entertaining units of clash of clans, since it is in charge of throwing logs without stopping destroying everything in its path, opening a complete path to the opponents' municipality. As a disadvantage is that it is not very resistant and quite slow.

Perhaps the deadliest unit in all of Clash of Clans, the Siege Barracks parachutes down and upon arrival release countless PEKKA and diligent magicians, which were in charge of cleaning up the entire area, in addition to this it transports units from the castle, being one of the deadliest weapons throughout the game.

As we could see clash of clans siege engines They are one of the most entertaining and quite difficult to use, locating a suitable situation is essential to properly open each and every one of the opposing defenses, how to get to your municipality as quickly as possible.

We hope that this article has been useful to you and that you can make enormous use of the clash of clans siege engines in the best possible way. We recommend that you read more articles related to the planet of clash of clans, as well as many other games on our official website.

add a comment of Clash of Clans Siege Machines