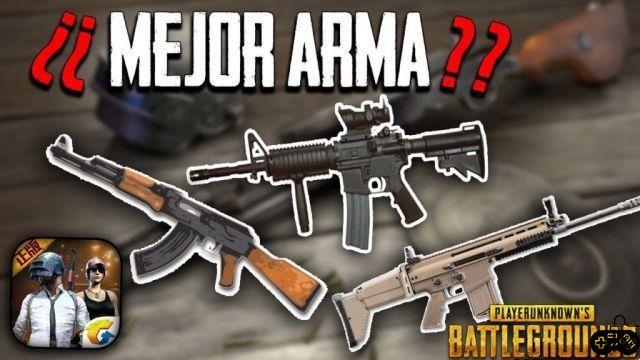 If you have wondered what is the best weapon of PUBG Mobile, in this article we are going to show you what, in our opinion, is the most broken weapon in the game, which by having it significantly increases your chances of winning. Keep in mind that this is our criteria. It is possible that there are better weapons for you, as you can ask anyone in the network of networks and the answer will be different. However, we have carried out a well-founded investigation to answer the question of what is the best weapon of PUBG Mobile.

Many believe that it is the M416, and the truth is that we could consider it. It is a fairly versatile weapon that adapts to most terrains. It serves as a sniper, and also for close-range combat. However, it can be noted that we cannot consider it the best because at great distances, its recoil does not allow you to shoot accurately.

The best weapon you will find in PubG Mobile

Of course it's not about the AKM or the M762. The damage these weapons deal is overshadowed by their inability to fire accurately even at a target a few meters away.

For now, the competition is between two weapons that you cannot generally achieve on the Erangel map. These are the AUG assault rifle and the G36C.

The high rate of fire of the AUG, coupled with its high accuracy and low recoil allows it to position itself among the best weapons in the game, if not the top one. In addition to this, with a muzzle flash suppressor and a good scope you can potentially reduce the recoil of the weapon.


There is currently an irresolution between the two weapons. The AUG also has enormous accuracy despite its rate of fire, but the G36C beats it a lot for damage and accuracy. We could then say that there is a kind of tie between the two. It will be up to the users to decide who gets the top 1.