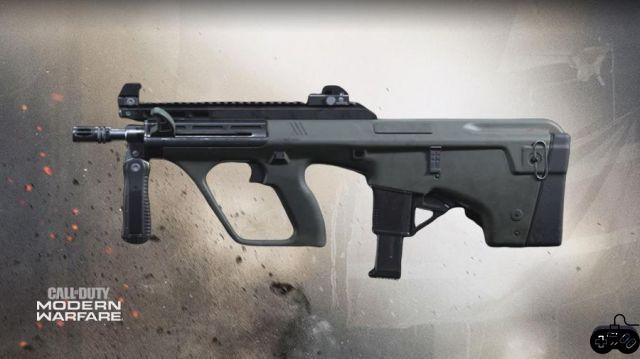 For a long time there was only one AUG in Warzone, the one added from Modern Warfare which is classified as an SMG.

With the addition of Black Ops Cold War weapons to the Warzone arsenal, there are now several weapon duplicates, including the AUG. Unlike the MW AUG, the Cold War AUG is a tactical rifle.

Now that that's cleared up, let's focus on the MW AUG.

The MW AUG remains a strong choice in its category in Season 4. It has a high rate of fire and it's a fairly easy weapon to control, meaning you can stay nimble in tight situations, something you would generally like to have as advantages when using an SMG.

It may not be as powerful as the MAC-10, but with the right set of attachments, we could take advantage of the weapon's advantages and try to negate some of its flaws as much as possible.

After three days of testing, we've come up with the version that will give you great results in Warzone Season 4.

Let's see what we think is the best class setup for the MW AUG in Warzone Season 4.

In our opinion, the MW AUG is still a great choice if you want to have a longer range oriented SMG in Warzone Season 4.

For this, we recommend these attachments:

And that's it, it's the build that can be played as both a primary and secondary weapon, but it requires drastically different approaches depending on how you want to play it.

It offers very high damage and accuracy, able to quickly deal with targets in mid-range and close-range situations.


One thing you will need to be aware of while playing is that your mobility is significantly hampered due to attachments, so you will need to think about your positioning and be one step ahead of your opponents.

Be sure to check out our dedicated Warzone section, filled with gun guides, tier lists, news and more for Season 4.